Abortion in the Hood, A Matter of Choice or Survival? 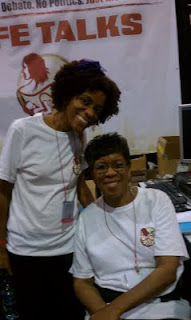 Those are strong words. They are words of truth. The black community has been targeted by the abortion industry and we have been targeted to such an extent that choice has been erased. Don’t believe it? Look at the facts. Just this week Life Dynamics issued this report: Racial Profiling by Planned Parenthood and the American Abortion Lobby Documented (http://bit.ly/ploVH0), that clearly and irrefutably shows that race is a factor in the location of abortion clinics around the nation. Take a look at the data from almost every state that reports abortion data by race – there is a clear pattern of black babies being aborted at two to four times the presence of blacks in the population of each state (http://bit.ly/piswfK).
For more than thirty eight years, the abortion industry has preyed upon those found in urban neighborhoods, feasting off blood of the more than twenty million black babies that have died in abortion chambers across the nation. And still they clamor for more, arguing that their targeting is a matter of choice when in fact it is a matter of genocide. Supreme Court Justice Ruth Bader Ginsburg, a sitting Justice since 1993, told us so two years ago in her interview with the New York Times Magazine (A Place of Women on the Court http://nyti.ms/3fbv4f) . 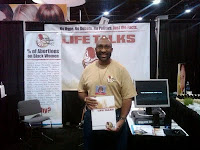 Clearly there is and was a need to do something different to shine a light on this dark agenda of the abortion industry. And we did. Several black prolife leaders joined me in an initiative to reach an untapped, but influential sphere of influence in the black community – the barber and hairstylist. Arnold Culbreath of Protecting Black Life, Dean Nelson of CareNet, Christina Martina of Bound for Life Atlanta, Alveda King of Priests for Life and other leaders convened at the Bronner Brothers Hair Show at the Georgia World Congress Center to participate in the Sampson Project – an outreach to those in the hair care field. We did not go to talk politics. We did not go to debate using the abortion rhetoric of today. We did not go to spin a yarn based on hype. We went to call attention to the leading cause of death in the black community. We went to awaken these influencers to the depopulation effect of abortion in America’s oldest minority community. We went to call attention to the loss of our legacy, our strength in abortion clinics across America. We went to enlist the aid of those who can make a difference in the fight while bringing clarity to the issue of abortion’s eugenics roots.

And we succeeded. More than a thousand make-up artists, nail technicians, hairstylists and barbers from 34 states and two nations (England and Canada) agreed to talk about the real purpose of abortion in America. Each one agreed to watch the documentary MAAFA 21 and to talk about it and the facts as presented in the packet of information we gave them. We showed them these statistics while having real life talks with them:

As they searched for their states' numbers looks of unbelief and sometimes horror flooded their faces. They began to understand the real impact abortion is having on the black community and we could see a new determination to get a better understanding of abortion and its roots in the American culture.

Many of those that stopped at the booth had their own story to tell. There were some that came to have prayer because they had urged an abortion upon their child. There were others that had abortions themselves and finally, could talk about it. There were those whose family members had abortions, one man reported his sister had eleven! There were those who called themselves pro-choice, but came away from the booth with a clearer picture of how abortion was being used as an instrument to control the black birth rate rather than an agent of a woman’s right to choose. There were pastors and bishops that were able to see that abortion in the black community is no civil right, but is a population control tool that is successfully decimating communities of color.

The three days that many sacrificed to participate in this outreach immediately bore fruit as more than a thousand new voices have been added to the great awakening, the third wave of advocates that now know abortion is no friend of women, especially women in communities of color. You may know barbers and hairdressers that would like to have this information in their hands. Contact the Restoration Project at Presidenttlrp@gmail.com to request more information.
Posted by Unknown at 7:40 PM 1 comment: